So, while I was ordering the Claymore Bag I thought to myself why not get a pair of flip-flops as well. I’m already paying express postage.

I asked CFF what they recommended as I was traveling to Thailand in a few months from placing the order. They recommended the AR15 asI will be doing a lot of outdoor walking and the dark colours of the AR15 will hide a lot of the dirt.

I did like the look of the AR15 and they have the Rim and Headstamp of a 5.56mm round, just like my F88 AusSteyr had when I was in the Army.

The black of the AR15s was just a little to plain for me. If I was going to get some of these cool flips flops I wanted them to stand out.

Sizing was a little tricky as AUS sizes are different to The US. I spent a little time looking around online for conversion charts, a lot of them showed different results and not knowing exactly what size I was myself. I committed to a size 10 as that seemed to be the best looking fit after taking a tape measure to my foot.

When I pulled them from the package that they came in along with the Claymore Bag I immediately put them on so I could wear them while I unboxed the bag. Straight away they felt like they would be a comfortable shoe.

Living on the East Coast of Queensland where really there are only 2 seasons, Wet and Dry, where the wet season can turn main roads to rivers in a matter of minutes. It has always been a hazard wearing thongs. You wear your thongs as you don’t want to get your runners or dress shows wet and potentially ruined, but there is always that risk that when crossing a pedestrian crossing in the rain or hitting a smooth part of wet concrete your faithful thongs turn into a deadly pair of Ice Skates that slide in all directions. With the Combat Flips Flops sole being the material that it is, I don’t think I will ever have that same problem.

The design looks a little more dressy than your typical Thong “Double Plugger”, but they don’t look too “Old Man” like some of the other dress looking thongs/sandals. The 7.62mm shell casing cast (the Ammunition used in AK47s, hence the name) stand out really nicely on the Burgandy (Red) band. The band is stamped embossed with Poppy flowers. The leather inner sole is a nice light leather colour, it is too stamped but with a design that is similar to the back of a shell casing and read *something about Kabul*

The firm, stable, but still soft and comfortable. The band/strap wasn’t sharp, maybe a little tight, but initial wearing in should sort that out, this would also help with my foot not quite fitting all the way on as a small part of my heel come past the back.

I have been wearing them now as my go-to shoe when I leave the house, In Australia thongs or Flip Flops is a staple footwear and everyone has at least 1 pair. They have worn in well, my foot makes it all the way on now, but I really should have gotten a size 11.

I wear them for long periods of time walking around markets or while hanging out at a bar on a Sunday afternoon. I’m not sure if its the way I walk or maybe something was spilled on them, but my left shoe is wearing a bit more on the heel then the left, not by much, but it’s just something I’ve noticed.

My last trip to Asia, I only put on runners once and that was to play a game of Paintball, the rest of the time I spent walking and doing light trekking in my faithful set of Double Pluggers. I look forward to spending most of my time wearing the AK47s in Thailand, after all, I am going to be there in peak monsoon season. I plan to write a small review on how the Combat Flip Flops 2015 AK47s perform being my main choice of footwear while traveling Thailand for a month.

They pair with the Waxed Canvas Claymore bag well. I am already browsing the site trying to decide which pair I will get next. 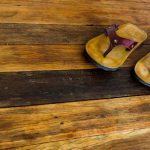 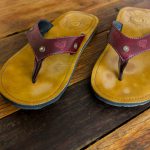 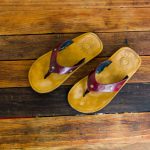